Just heard that Lady Gaga wore her meat dress at the wrong time. She was actually meant to wear it at the ‘meat and greet’ aftershow

Lady Gaga wore a bacon dress to the VMA Awards last night. I didn’t even know that Richard Bacon was a fashion designer.

People were saying that wearing a meat dress is a bit off. It will be if not refridgerated properly.

Lady Gaga won eight awards on the VMAs and accepted them in a dress made of meat. She’s also getting ready to launch her new fragrance. It’s called “A-1 Steaksauce.” Domino’s Pizza is testing a breakfast pizza. Big deal, single guys have been eating pizza for breakfast for years.

The Senate has ordered that television commercials must not be too loud. Now, how about getting us out of Afghanistan?

The Nobel Prize in the fiction category went to Christine O’Donnell’s resume.

Somebody threw a book at President Obama. If you’re trying to scare a president by throwing a book at him, you’re one president too late.

Rihanna revealed this week that she texts Lady Gaga before major events to make sure they don’t wear the same outfit. Can you imagine that conversation? It’s like, “Hey Gaga. Are you wearing the blue satin dress tonight or are you gonna wear the cold-cut platter from Blimpie?”

The Swedish prime minister was re-elected. He was happy to keep his seat, mostly because it took 85 hours to assemble from Ikea.

It’s Canadian Thanksgiving Day. On this day, Canadians gather with their families to give thanks that Celine Dion moved to Las Vegas.

Today we found that a third college Christine O’Donnel said she attended had no record of ever knowing her. I’m starting to wonder if she ever went to Hogwarts.

Leno
That idea about using a concrete dome to cover up the oil leak in the Gulf did not work. Experts are calling this the worst use of a concrete dome since they built that stadium for the Detroit Lions.

President Obama said he’s angry and frustrated with the oil spill in the Gulf and the oil companies behind it. He said he’s tired of all the finger-pointing — then he blamed the Bush administration for everything.

Congress told BP that they can’t “label this catastrophic failure an unpredictable and unforeseeable occurrence.” Congress used that excuse already for not catching the financial meltdown in time.

The White House says that BP is moving up its timeline for containing the oil by two weeks. They said they’d get it done even if they have to work six hours a day, four days a week.

President Obama had a 30-minute phone call with British Prime Minister David Cameron about the BP oil spill. The conversation is supposed to stay private, but given that it’s BP, you can probably expect a few leaks.

Here’s a little bit of good news. The Coast Guard says that BP is now catching up to 630,000 gallons of oil a day. The bad news is that they’re capturing it with ducks.

President Obama is on his fourth visit to the Gulf since the spill began. The head of BP is saying, “See, it had no effect on tourism.”

JAY LENO
Osama bin Laden has released a new audio tape in which he threatens to kill Americans, as opposed to his earlier new age, motivational tapes.

President Obama has restricted the use of nuclear weapons to only be used against Iran, North Korea, or Fox News.

Buzz Aldrin was kicked off of “Dancing With the Stars.” For some reason, on the moon, he seemed so much lighter on his feet.

Late Show With David Letterman
Tonight is Passover, not to be confused with what happened to me and Conan, that was “passed over.”
In honor of Passover, that last joke was unleavened.

A lot of people are unhappy about healthcare reform. Personally, I loved paying huge premiums and driving to Canada to buy cheap drugs.

The 2010 Census is coming up. There are some changes this year. Under gender, you can choose between male, female, or Gaga.

Apparently the Republicans spent more than $2,000 at a sex club. Now there’s your stimulus package.

For months, everyone was waiting for the iPad. It took longer to come out than Ricky Martin

Jimmy Kimmel Live!
It’s so important to vote for “American Idol.” Otherwise, you forfeit your right to complain about the direction Karaoke is heading in this country.
Thursday is the deadline for the census. A census taker will come to your house if you don’t reply by mail. So unless you want to have a conversation with another human being, you better get that in.

Madonna and Lady GaGa staged a catfight on a recent edition of Saturday Night Live.

The two singers started to perform a dance-off wearing black knee-high boots and lingerie.
Madonna then began pulling GaGa’s wig and throttling her, while shouting, “What the hell is a disco stick?”.
After being separated, GaGa turned to the 51-year-old and said: “Guess what, Madonna, I’m totally hotter than you.”

Madonna replied: “Hey, guess what, I’m taller than you. What sort of a name is Lady GaGa? It sounds like baby food.”

The popstars ended the skit by moving in for a kiss, but at the last second…

And as a bonus… 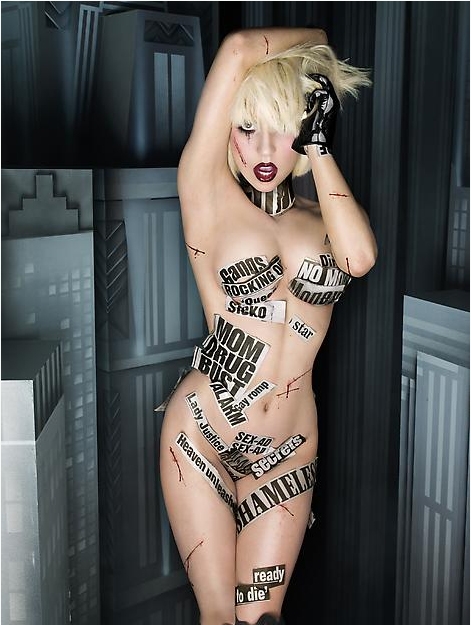 Could be worth setting the Sky Plus and Tivo for.